Waves are key to the physical processes occuring in coastal landscapes. The size and energy of waves are determined by the fetch. How strong the wind is and how far the wave has travelled also contribute to the size and energy.

Fetch: the distance of ocean that the wind has been blowing over.

Swash: the movement of a wave up the beach

Backwash: the water from a wave returning to the sea.

These waves have a stronger swash than backwash and deposit material on beaches building them up. They are lower in height than destructive waves and also less frequent.

These waves have a stronger backwash than swash which removes material from beaches. They are steeper, higher and more frequent than constructve waves.

The erosion process that act upon coasts are the same as those in rivers:

The rate of erosion occurring along coastlines depends upon the type and strength of the waves, but also the type of rock.

Erosion and deposition constantly change coastlines around the world posing many challenges for the communities that live along them. 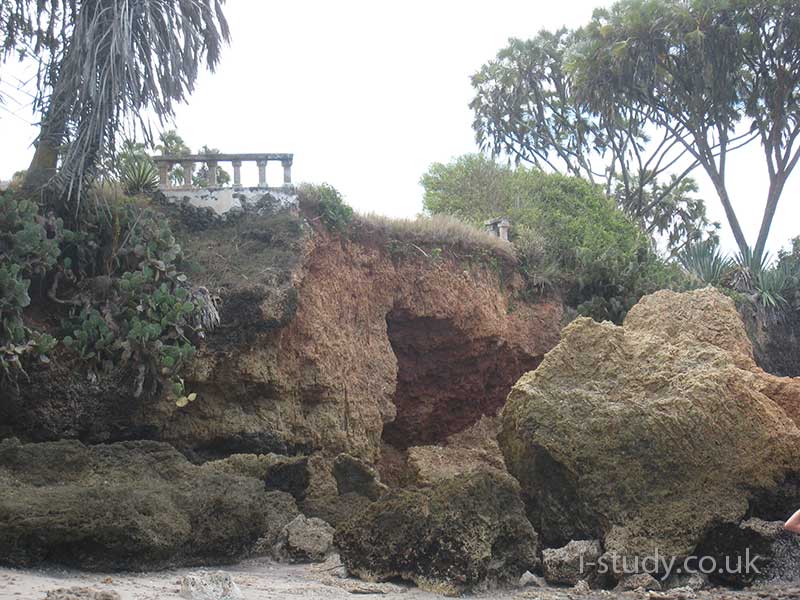 Material is transported along coastlines due to the direction that in which the waves are travelling.

The swash often comes up the beach at an angle depositing material. The backwash returns directly back to the sea (gravity is acting on it rather than the wind). This process repeatedly moves material along coastlines. The prevailing wind reaching a coastline means that there is usuall a distinctive longterm direction of transportation.

Changes in the wind direction may alter the angle at which the waves approach the coast meaning that the direction of longshore-drift may change temporarily.

Groynes made from treated wood are commonly used to slow down the process by trapping the sand as it moves along the beach. These are relatively cheap and can be removed without leaving permanent damage. Concrete blocks/rocks are sometimes used to achieve the same result. 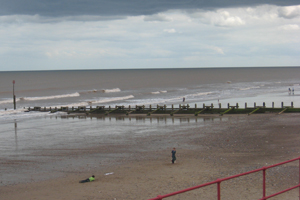 Areas of softer rock erode more rapidly than bands of hard rock. The result of this uneven erosion is the formation of bays with rocky outcrops of headland at the ends.

Bays can vary significantly in length from a couple of hundred meters to many kilometers. 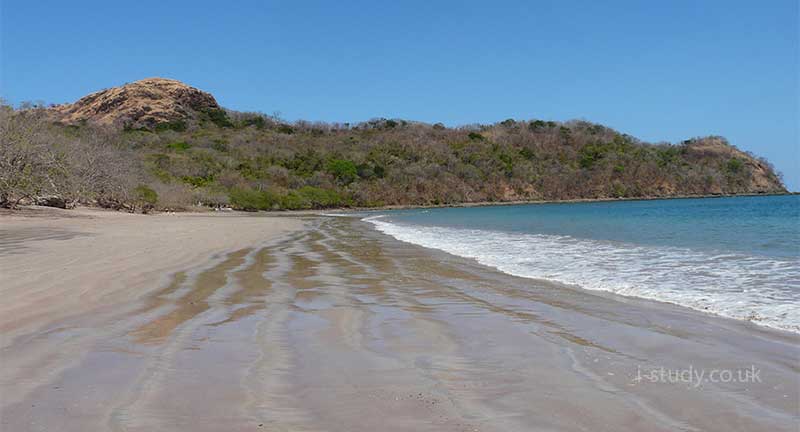 Headlands are exposed to the full force of the waves. As they erode they often form distinctive characteristics.

The Australian southern coast is famous for these landforms, named the 12 apostles. 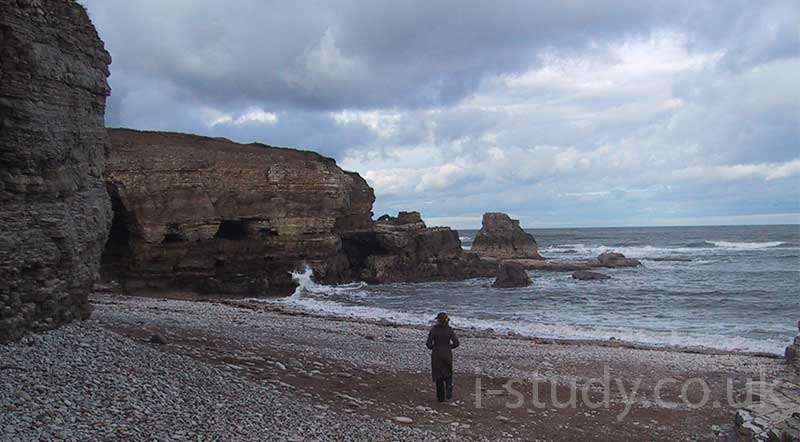 These form along areas of harder rock where the base of cliffs are eroded, undercutting them until sections fall.

The section eroded at the base of the cliff is called a wave cut notch. See Figure 5.9.

As this is repeated the cliff retreats leaving a platform of hard rock, often covered at high tide but exposed at low tide. See Figure 5.10

The debris from fallen sections of the cliff is often spread across the platform. 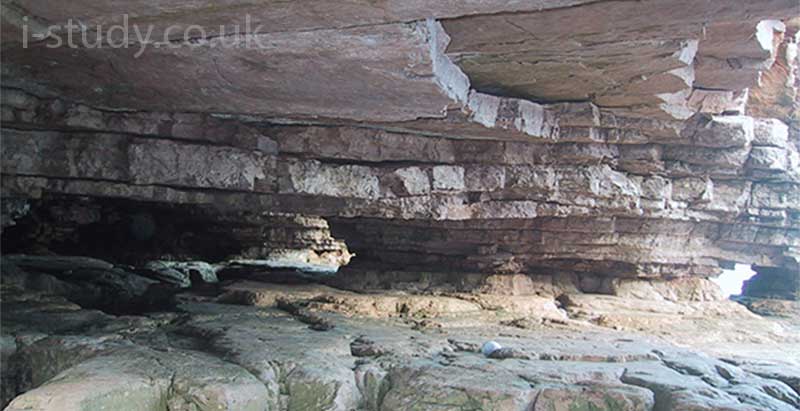 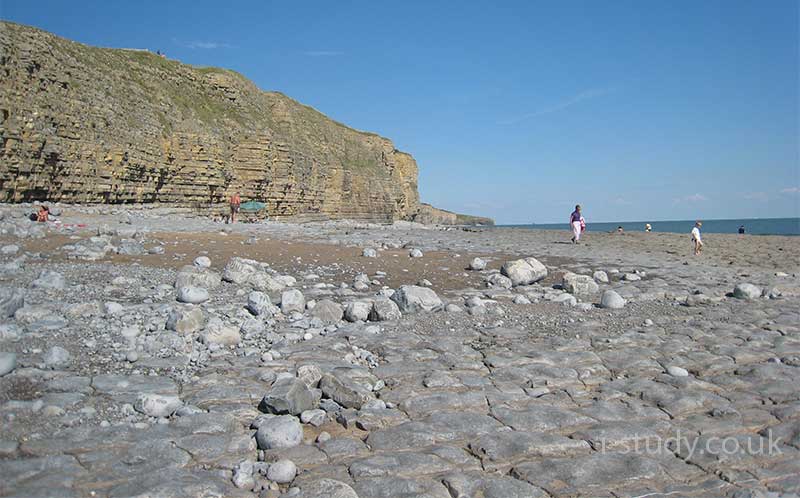 In areas where the coastline is sheltered from the full force of the waves the water has less energy and deposits material. Headlands often protect sections of bays from waves coming in at an angle. Deposited material forms distinctive geographical features.

Bars: these are ridges of sand that extend across bays or estuaries blocking them from the sea.

Tombolos: these are bars that stretch out to a nearby island.

Spits: these form at indented sections of coast or besides headlands. They stretch out as a sandy ridge and are often curved at the end due to the effects of changing winds on the wave direction. 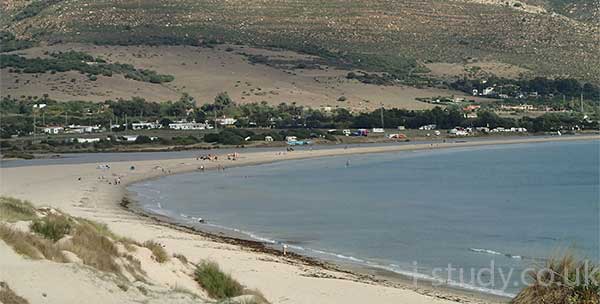 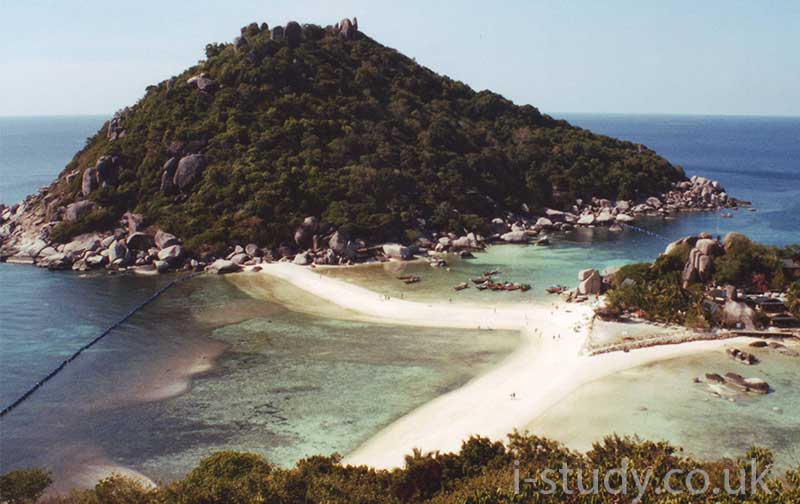 Sand dunes are banks or ridges of sand that form at the back of beaches. They trap sand blown by the wind and gradually increase in size.

Grasses and other vegetation often establish themselves overtime and these help stablise the dunes by trapping the sand. The roots also hold the sand in place. Dunes often gradually change shape and size as sand is continually eroded and deposited.

Sand dunes form an important ecosystem providing a habitat for a range of plant and insect life. 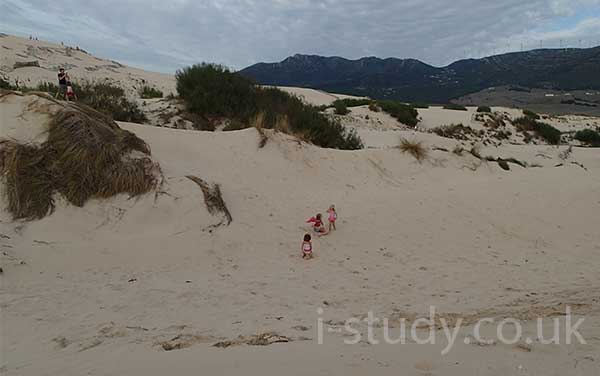 Watch Video 5.1 and use this link (use the subpages in the coral section) to answer the questions.

Mangroves play a vital role in coastal ecosystems. They are an essential part of the the natural environment, stabalising sediment, providing a habitat for a diverse range of species. They are also an excellent form of protection against storm surges and tsunamis.

Use this link and the other mangrove subpages to answer the following questions. 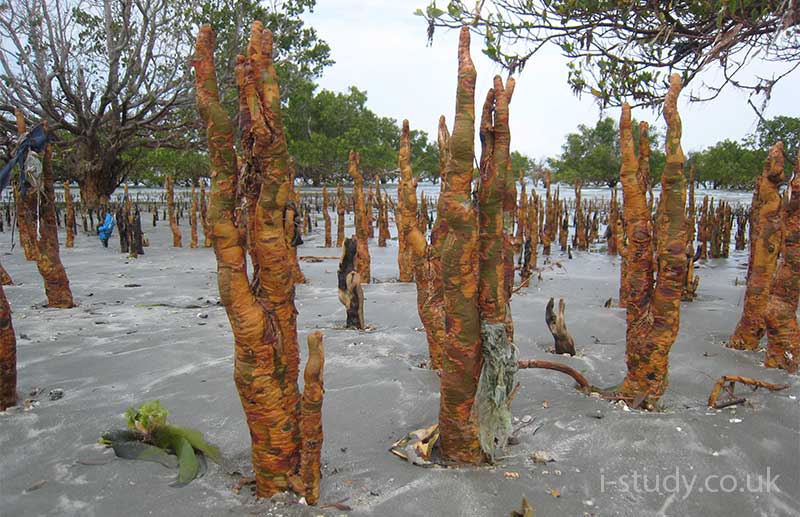 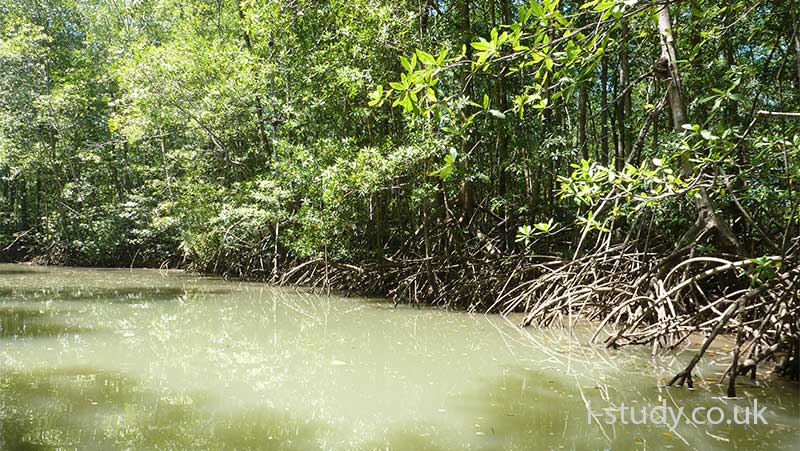 Coastal zones make up only 10% of the ocean environment, but are home to over 90% of all marine species. Of the 13,200 known species of marine fish, almost 80% are coastal.

Coastal environments present hazards for people living along them. One of the major hazards is the risk of flooding due to high tides or storm surges.

Watch the 1st video which looks at the impacts of hurricane Sandy on the New Jersey coastline in the USA.

Rock armour is the use of large boulders or rocks that are placed at the bottom of cliffs or sand dunes to absorb the energy of the waves and protect the land behind.

It is a relatively cheap method of protection since local materials can be used. The rock armour can be quite easily removed in the future leaving little impact.

These are wire cages filled with rock/pebbles/shingle and perform the same function. Again they are relatively cheap since they can be assembled at the location they are to be used in. Local material can be used to fill the cages and they can also be removed easily at a later date. 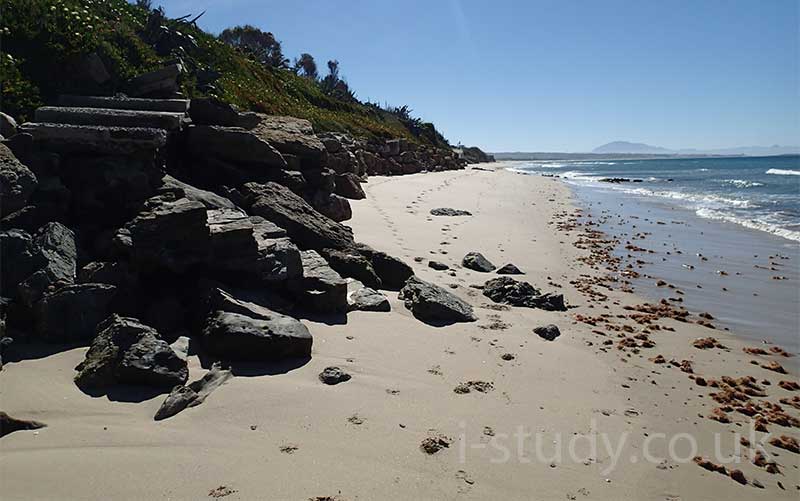 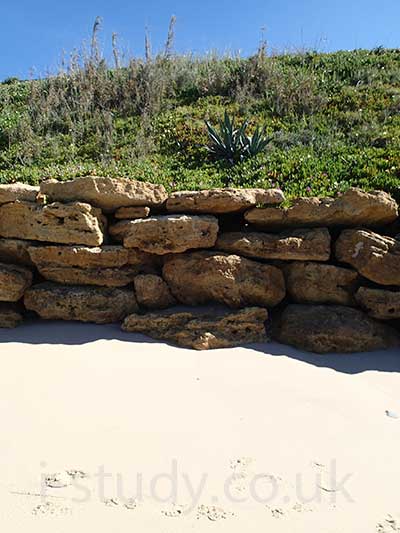 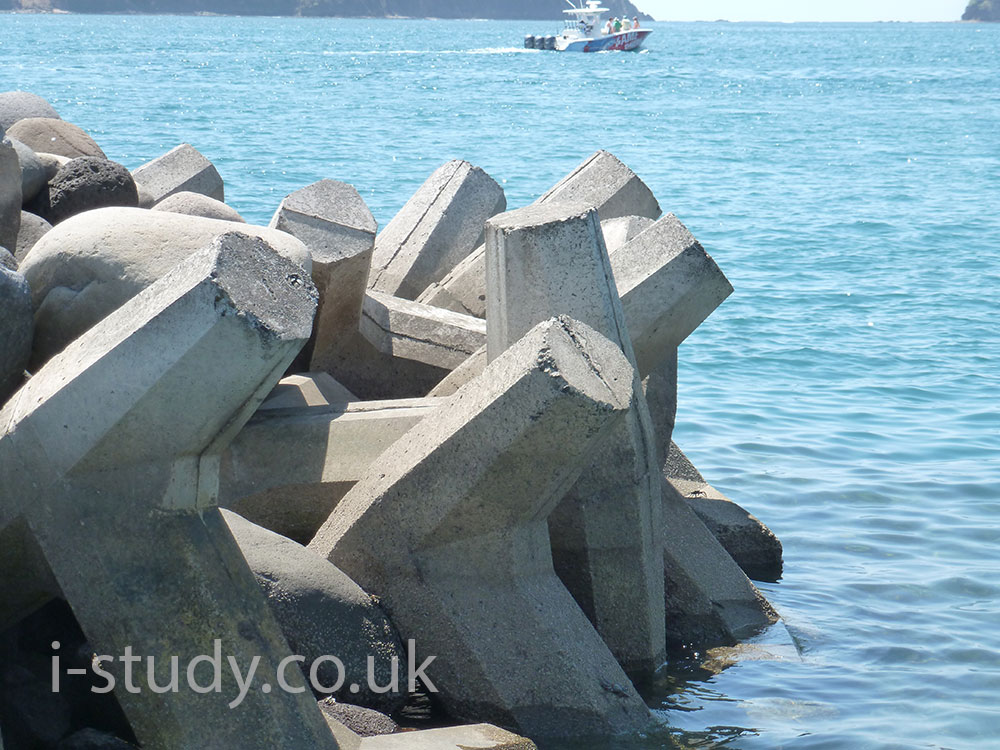 One method of managing coastlines is to let the sea reclaim protected land and allow nature to determine the changes.

Watch the first video opposite and answer the following:

Watch the 2nd video opposite and use the link below to answer the following:

Beach replenishment is the process of bringing extra material (sand) to replace sand lost through erosion. It is an expensive way of managing the coastline and usually needs repeating regularly since the erosion continues to remove the sand.

Stretches of coastline that depend heavily on tourism may use this method as the income generated by the beach can justify the cost.

Marbella, as popular toursit resort on the Costa Del Sol replenishes the sand each year in preparation for the main summer season.

Throughout spring 2015 the 4 main marinas/ports are being dredged due to sediment blocking their entrances and the sand is being used on the surrounding beaches.

Many rock groynes have have been created along the most developed stretches of the coastline to slow down the rate of erosion. 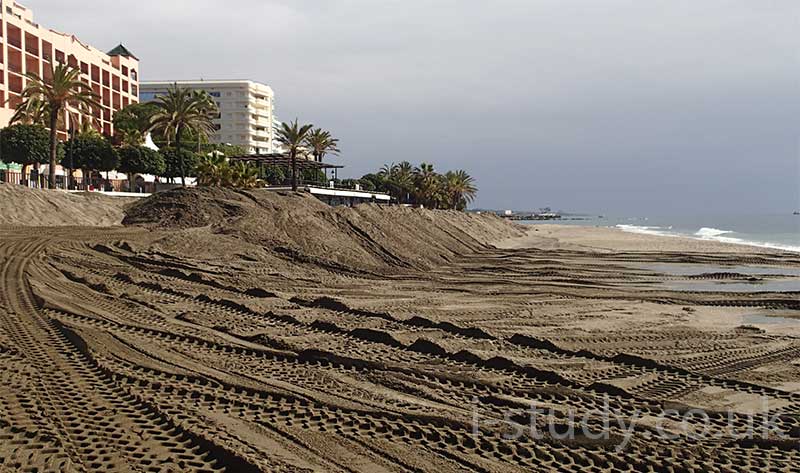